Fall in Wisconsin has all sorts of indicators: leaves changing colors, cooler temperatures and a progressively earlier sunset.

But there’s another involving your trees that’s a telltale sign of the shift in seasons: buck rub. This is when male deer mark their territory by removing bark from trees with their antlers.

Buck rubs appear in early September through November. That’s typically when bucks lose their antler velvet, which is a soft tissue that covers growing antlers from late spring through late summer. Throughout this growth period, the buck’s developing rack is fairly soft and flexible.

However, it hardens to bone as the bucks’ testosterone level starts climbing. Once antlers are fully developed, their velvet starts drying and shedding. Bucks accelerate its removal by vigorously rubbing their antlers on trees or raking them through dense brush.

They usually shed all of their velvet in less than 24 hours.

Early-season rubs typically aren’t as aggressive, destructive and common as those made weeks later when the bucks begin their breeding season, or rut, nears. For most of the country, the rut occurs from late October to early December. Before and during the rut, bucks rub trees to mark their territory, work off aggression, and intimidate other bucks.

A series of rubs made along a trail or field edge are called rub lines, and provide clues about their travel patterns. Rub lines always have a pattern. If you can’t determine a pattern and direction of travel, the rub was probably made by a wandering younger buck.

Buck rubs also serve as dominance symbols and communication signposts. They notify other deer of the buck’s presence and also alert to breeding intentions. When a buck rubs trees, brush and small saplings, it leaves behind scents from its forehead. Other deer often sniff rubs, and sometimes rub the spot themselves before they move on. Even young does sometimes rub their foreheads on a prominent rub area to signal their return presence.

Bucks can rub trees or saplings as small as your pinky finger and as large as a telephone pole, sometimes larger! Deer hunters often debate whether a buck’s antlers and body size correlate to the diameter of trees it typically rubs.

However, researchers- and hunters- regularly report big bucks rubbing saplings and small bucks rubbing much larger trees. In general, though, truly giant rubs on trees- measuring 10 inches or more in diameter- are initiated by mature, large-antlered bucks that are huge in size.

Active or new rubs will have sap or moisture at the edges. Dried up or bleached out rubs are probably from last year.

The major problem encountered with buck rub is the damage that occurs to trees characterized by vertical scrapes and shredded bark, which exposes the underlying vulnerable wood.

When they rub their antlers against a tree, it scrapes the surface of the xylem and removes the cambium at the base of the tree trunk. Xylem carries water and minerals from the roots to the leaves. Cambium is the tissue that is responsible for the secondary growth of wood that results in increased thickness after injury in these situations.

If the injury has happened recently- a couple of days to a couple of weeks- the tree may still have a healthy appearance depending on several factors: including how much of it is injured, the time of year, and the temperature.

If the injury is only on one side of the tree then it has a good chance of survival. although it will likely be weak in that spot, and have an ugly scar depending on the depth. If the injury is all the way around the tree, it will most likely die.

So how do you protect- or save- your landscape investment from the damage caused by deer on your property?

The best way to do this is to physically block trees off with a fence or tree guard. Usually made of plastic or mesh, they’re a quick fix. They wrap right around your tree’s trunk and prevent deer from rubbing up against the bark. 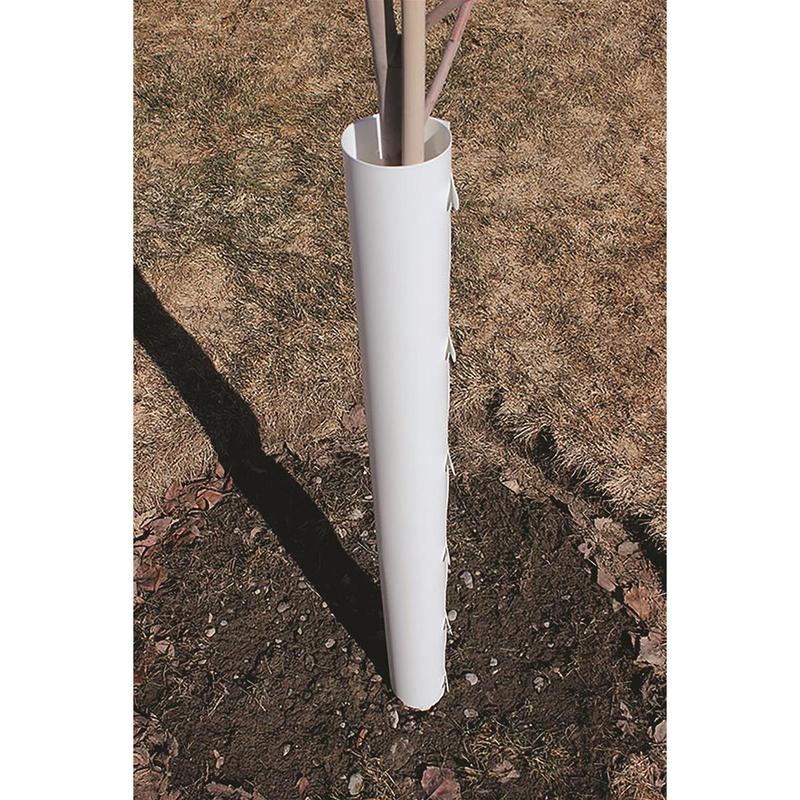 Alternatively, you can wrap your tree loosely in chicken wire or burlap both of which are available at your local hardware store.

If you have many trees on your property, surround the entire area with woven-wire fencing. There’s a multitude of options available to help protect your property.

If you have any issues at your property that may be attributed to buck rub please contact your Client Service Representative or call our main office at 262-252-4541 for more information.